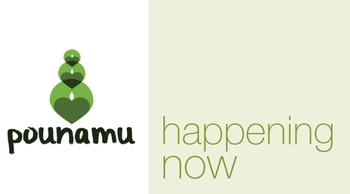 On 29 and 30 August 2013 people from all over New Zealand are invited to create a better future for New Zealand by joining in the on-line game in the future world of Pounamu to find thousands of answers to the question:

How do we treasure and build on what we already have — land, people, knowledge and connections — with new tools, new capacities, new connections and new ways of thinking to generate prosperity for all?

StratEDGY Strategic Foresight, has come together in partnership with the Professor Shaun Hendy and MacDiarmid Institute for Advanced Materials and Nanotechnology to run the Pounamu game.

When will Pounamu run?

Everybody!  The game is for anyone who wants to think about a future for New Zealand where we use new approaches to tackle a world of more demands and fewer resources to create the best paths forward.

Sign up for Pounamu, watch the game video and create your player online.

This is serious, why play games?

Some of the possible futures we face, globally and for New Zealand, are grim and some approaches to thinking about the future heap desperate news on top of bad. It’s easy to feel overwhelmed and disempowered. Fear and anxiety shut down parts of our brains. Gaming can open them up again.

We always have to be grounded in the facts and the data, but sometimes the best way to imagine creative responses, shift our thinking, rekindle optimism and move towards action is by gaming and having fun.

The world of Pounamu

Pounamu is set in 2023, in a world of fewer resources and more demands, but also of new capacities to connect, to share, and to create new knowledge and new solutions.

In 2023 energy, water and food will be in short supply across the globe and cost more.  Skilled work will generate nine times more income than unskilled work.  At the same time, we’ll have an ageing population, with fewer people in the workforce to meet the needs of those who aren’t working any more.

Unless we apply technology to our challenges and build the skills to move to high value work, as a country we won’t be able to afford everything we’d like. Instead we’ll have to make some hard choices, for example, between keeping rural roads open or funding drugs for Alzheimers; between education for the fortunate few, or mining the seabed to pay for education for all; between working at the cutting edge of one’s field or living in New Zealand.

At the same time, we have the capacities to connect, to share, and to create new knowledge and new solutions at a scale never experienced before in human history.  We have technology, from the level of manipulating sub-atomic particles, to printing molecules to connecting sensor networks across the world that can both generate revenue and create benefits for individuals and communities.  We already have examples of high-tech, high return global businesses operating from New Zealand (and four of these, Aeroqual, Polar Bear Farm, Magritek and SmallWorlds.com are showcased on the Pounamu site).

The game provides the opportunity for us to explore what could we do, for ourselves and for others, if New Zealand was the most science literate country in the world.  It allows everyone to imagine their answers to the question:

If in 2023, everyone in New Zealand was smart about science, what could you do to make New Zealand a place where you and other talented people like you want to live?

Get more information about the world of the game.

Pounamu is being run with the support of the Institute for the Future on their ‘Foresight Engine’.  The Foresight Engine is a platform for bringing people together to think about issues that are important to them in ways that pool different knowledge and perspectives. It is specifically designed to facilitate the kinds of conversations which are required for the resolution of problems of national significance.   This is the third time StratEDGY has partnered with others to provide a free public futures game for New Zealand on IFTF’s Foresight Engine.  (StratEDGY partnered with the MacDiarmid Institute, the Royal Society of New Zealand, the New Zealand National Commission for UNESCO to deliver a Pounamu game for the Transit of Venus Forum in 2012, and with Landcare Research and the Christchurch City Council to run Magnetic South, a game about the long-term future of New Zealand in 2011. Contact Stephanie Pride at StratEDGY if you are interested in running a public good conversation on the Foresight Engine in New Zealand

ArtsTech – the future of robots will be... human!
Call for Expressions of Interest in participating in ArtsTech Speed Dating 9 May 2017
StratEDGY presents ArtsTech Speed Dating for Tech Week 2017
Boaty McBoatface provides a useful lesson for institutions in a post-institutional age
Beyond externalities - IMF, fossil fuels and subsidies
Pounamu 2013